Hello my dear friends. Today we will continue talk about Chef Server. All example code you can find here: github.com/le0pard/chef-server-example/tree/2.0.

In the previous article we learned Chef what is Chef Server and how to setup it. In this article we will learn how to work with it.

In previous article we setuped chef server and added to it one node (server). We use for an authentication with chef server ssh keys. Also for knife we have configuration in knife.rb. All this stuff should be in “.chef” directory. This is our modified knife.rb file (fixed paths for keys):

When a node runs the chef-client for the first time, it generally does not yet have an API client identity, and so it cannot make authenticated requests to the server. This is where the validation client—known as the chef-validator—comes in. When the chef-client runs, it checks if it has a “client_key”. If the client key does not exist, it then attempts to borrow the identity of the chef-validator to register itself with the server (“validation_key”).

Attributes are always applied by the chef-client in the following order: 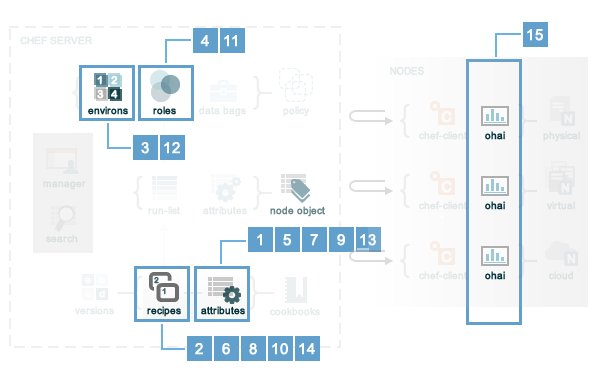 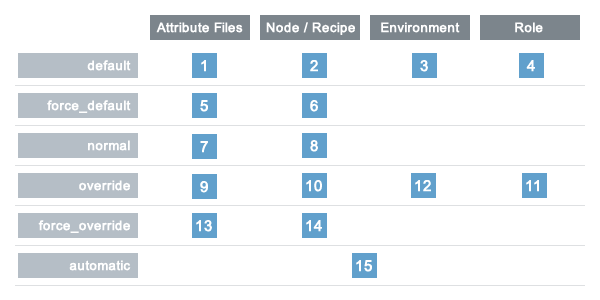 By default, as you remember from previous article Chef working only on https protocol (security!). But this can be problem, if you don’t want buy valid ssl certificate for your chef server, because each command to chef server by knife will give you error with invalid ssl. Most simple solution - disable https and working only on http. For this lets modify our chef.json role:

I added section “nginx”, which allow us to work by http protocol with Chef server and “bookshelf”, which should write url to chef server without https. If we leave https, in this case bookshelf will be available only by https.

In comparison with Chef Solo, Chef Server store all information on server and use only this information for “cooking” nodes. So we should know, how to upload our roles, cookbooks and nodes on server. First of all we should install vender cookbooks localy by Berkshelf:

As you can see dependencies downloaded automatically. Right now we have this cookbooks only in our local directory “cookbooks”. Let’s upload its to Chef Server. To solve this task we can use knife:

or we can use berkshelf:

If you actively develop some cookbook, sometimes you don’t want change version each time for little fix. But Chef server by default will not allow upload the same versions of cookbook:

As you can see we can forse update cookbooks by option “–force”:

You can see all your cookbooks in web interface (if you enable it): 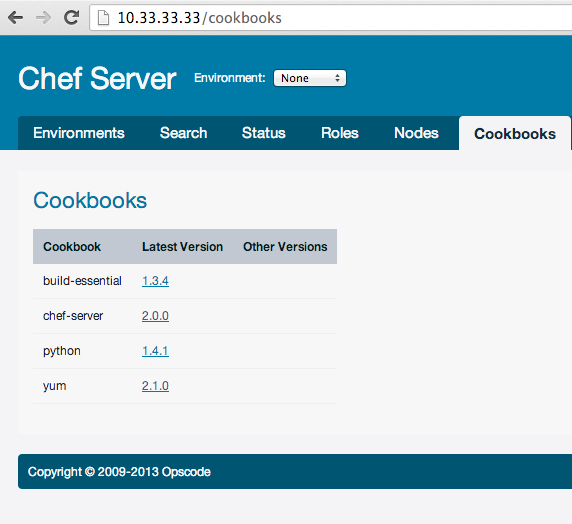 Next we want upload or update roles on server. It’s also easy:

This is role in web interface: 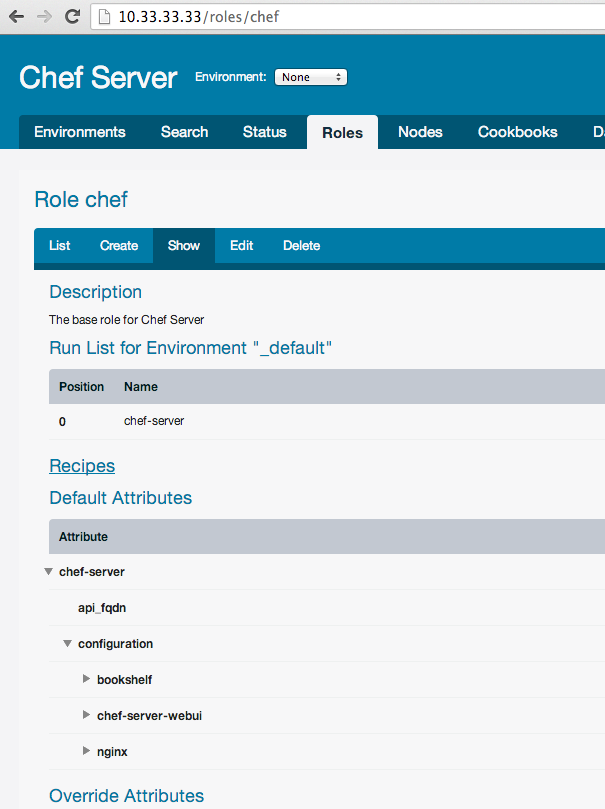 Almoust the same commands for upload or update environment:

Also you can upload everything by command “upload”:

Just don’t forget to do this. Save current nodes, environments and roles also good point in git (hg, svn, etc.) repo, because if you will lose by some reason chef server, all cookbooks and recipes will saved.

Cooking of the nodes

Ok, so let’s cook our node “web.dev”. We will install on it python. So let’s add to “web.node” run list:

And update web.node on chef server: 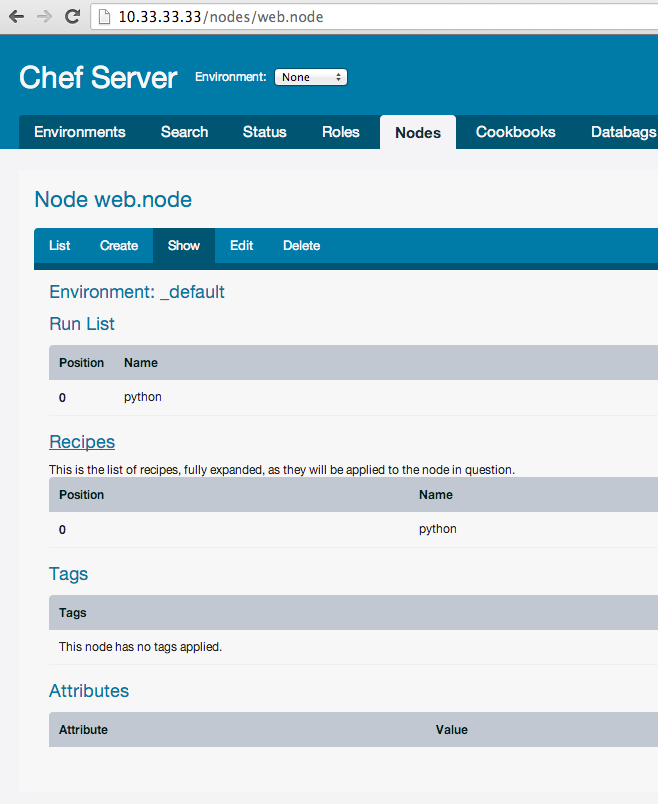 For this command you can use ssh options:

The ‘name:*’ is query, ‘sudo chef-client’ which we must execute on nodes, which found by this query. For example, show uptime only nodes with role web

To upgrade all nodes:

But sometimes you may want update you servers automaticaly. For example, you just updated new cookbooks, roles and nodes and all nodes should automaticaly fetch new cookbooks and execute its, if it updated (and for you not critical update speed). We can use special cookbook “chef-client”. It allow for use bluepill, daemontools, runit or cron to configure your systems to run Chef Client as a service. Example of attributes for nodes:

So for each node you can add this role. It will check for updates chef server each 1800 sec (30 min).

In this article I am not cover many things about Chef server (advanced usage, knife-ec2, opsworks - based on chef solo, etc.), but I hope this should be enough for begin working with it.

All example code you can find here: github.com/le0pard/chef-server-example/tree/2.0.