Hello my dear friends. Today we will continue talk about Chef Server. All example code you can find here: github.com/le0pard/chef-server-example/tree/1.0.

In this article we will learn what is Chef Server and how to setup it.

What is Chef Server?

There are three types of Chef servers:

In the series of articles we will work with Open Source Chef.

What is difference between Chef Solo and Chef Server?

Chef Solo does not provide:

As you can see, Chef Solo useful for small infrastructure (several servers), but if your you have huge amount of server - you must use Chef Server.

Attributes for recipes can be redefined in this way (except “override attributes”):

In this series of articles we will work with Chef 11. You can read about changes in this Chef version by this link.

To setup and configure Chef Server we will use Chef Solo (really? :). Chef Solo will help us quickly deploy Chef Server on a new server, if with it something happens (crash file system of server, etc.). Do not forget to make a backups of Chef Server (because compared with Chef Solo, Chef Server will be the point of failure in your configuration management system).

Let’s create our folder, which will contain all our Chef kitchen:

Next I will use bundler to get some useful gems:

And will create kitchen for Chef:

As you remember, to manage cookbooks for Chef Solo we used librarian gem. For this tutorial I selected another good gem for manage a cookbooks dependencies - berkshelf. You can use any which like, but compared to the “librarian” the “berkshelf” has several pros:

Let’s create Berksfile file and add to it “chef-server” cookbook (this cookbook supported by Opscode):

After launch of command “berks install” your cookbooks directory will be clear, because by default “berkshelf” install cookbooks into “~/.berkshelf” location. You can easily install your Cookbooks and their dependencies to a location other than default by argument “–path”:

But right now we don’t need this.

After this we should configure for Chef Solo node for our Chef Server. I will do this by using role. First of all, we should create “chef.json” in folder role with content:

By “configuration” key you can change settings for Chef Server. All available setting, which is possible to redefined, you can find here.

We are ready for testing this Chef Server kitchen.

For testing Chef Server by vagrant we need download vagrant box. List of boxes you can find at www.vagrantbox.es.

Next we need modeling a cluster of machines by vagrant. Let’s modify Vagrantfile:

After installation Chef Server with default settings, Chef will generate pem keys, which will be used for knife (command line tool for Chef) and Chef clients for authentication with server. We should copy its from our Chef Server to “.chef” directory in project:

On prodution you can use scp command for this.

Next we should create for knife configuration file (knife should know how to communicate with Chef Server):

If you have such error:

As a result, you should have a file “.chef/knife.rb” with similar content:

If you see error on command “knife client list” - check you knife configuration, you pem keys and availability of Chef server.

Once the Chef Server workstation is configured, it can be used to install Chef on one (or more) nodes across the organization using a Knife bootstrap operation. The “knife bootstrap” command is used to SSH into the target machine, and then do what is needed to allow the chef-client to run on the node. It will install the chef-client executable (if necessary), generate keys, and register the node with the Chef Server. The bootstrap operation requires the IP address or FQDN of the target system, the SSH credentials (username, password or identity file) for an account that has root access to the node, and (if the operating system is not Ubuntu, which is the default distribution used by knife bootstrap) the operating system running on the target system.

So let’s do this:

As you can see we get new client “web.dev”.

You also can see this client in Chef Server web interface: 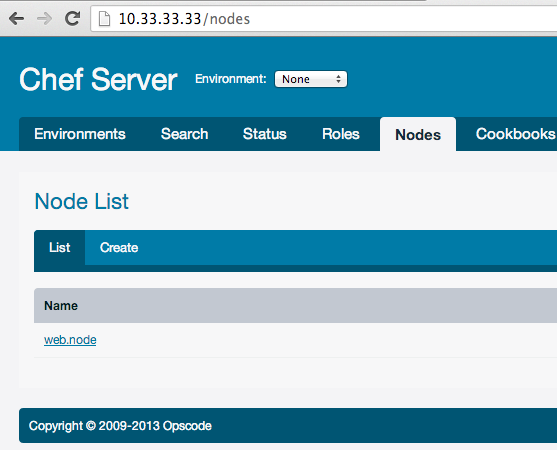 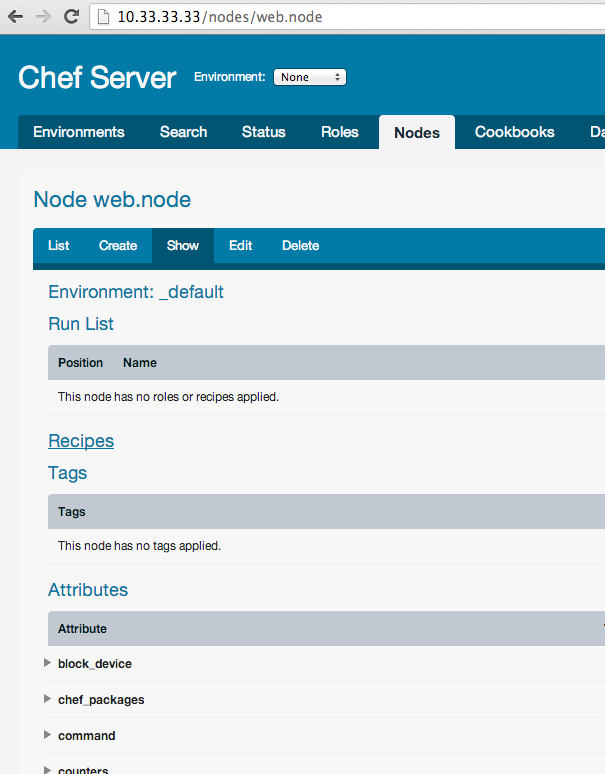 In the current article we have learn what is Chef Server and how to setup it. In next article I will cover how to work with Chef Server.

All example code you can find here: github.com/le0pard/chef-server-example/tree/1.0.